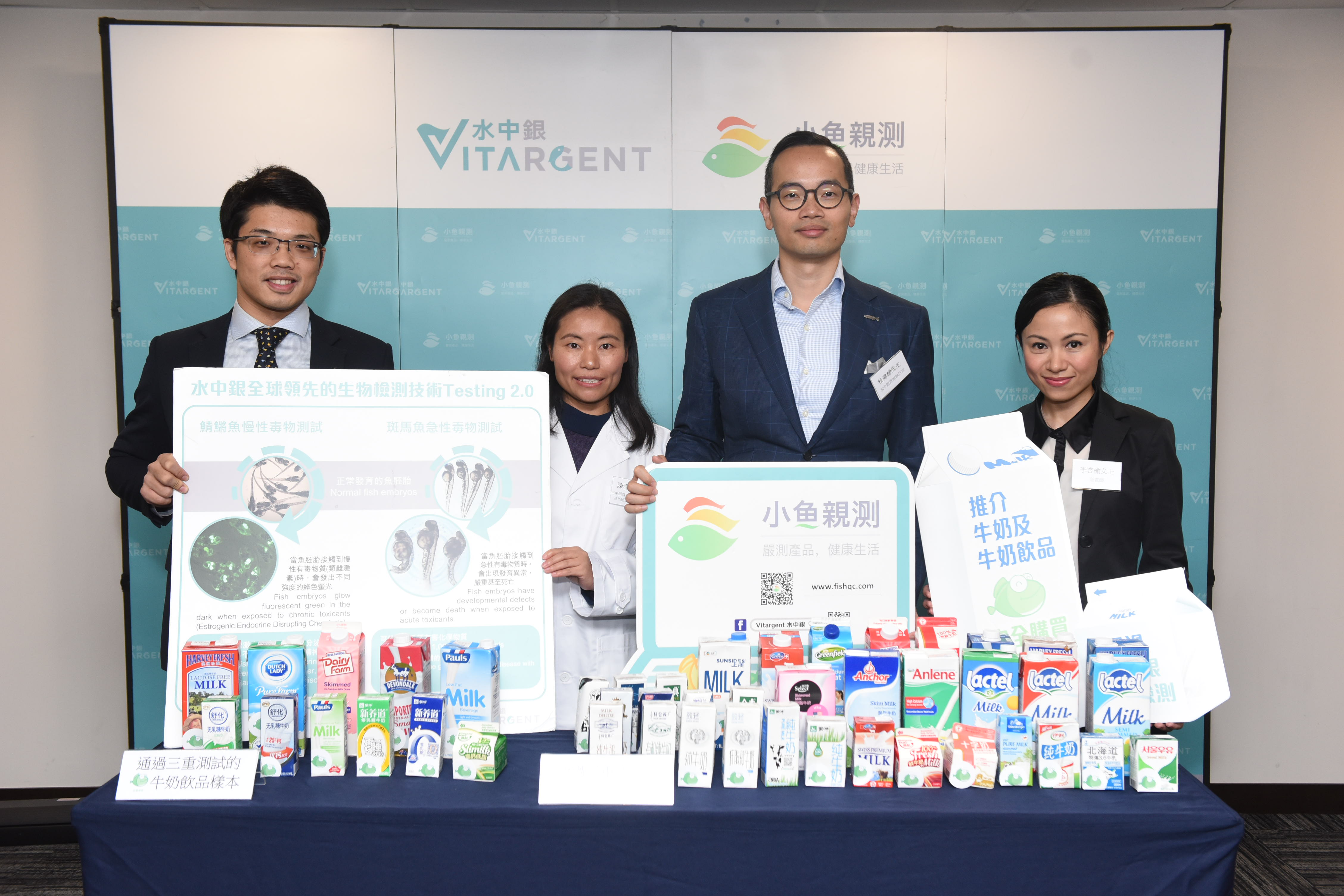 (Hong Kong, 23 November 2017) Vitargent (International) Biotechnology Limited (“Vitargent”) published test results of 68 popular liquid milk and milk beverage products under 29 brands available in the market on its Test-it™ information platform (w2.fishqc.net). Known for its recent six safety examinations of cooking oil, BB cream, instant coffee, sunscreen, ice cream and lip balm, Vitargent has applied the “transgenic medaka” and “zebrafish” embryo toxicity testing technology, which is unique in the world and developed by Hong Kong scientists. The safety test rated 46 samples as Green Fish (excellent), 10 samples as Yellow Fish (basic) and 12 samples as Red Fish (sub-optimal). Nearly 30% of the samples were milk beverages (i.e. containing food additives or are solids derived from milk), some of which were added 13 types of additives. The overall safety of milk beverage samples was lower than liquid milk samples by over 50%. Vitargent noted that many consumers are not aware that the common “fresh milk” can be divided into two groups: liquid milk and milk beverages. Consumers are recommended to read information about product origins and ingredients on the labels before purchasing, and choose products that are safe to buy and those that have passed the “Green Fish” triple test.

Milk is an important part of a balanced diet. However, people usually focus on product origins, fat content (whole-fat, low-fat, skimmed) and flavour instead of the types of milk. According to the guidelines on milk classification of the Centre for Food Safety of Hong Kong, milk can be grouped into three categories: milk (means cows milk and includes cream and separated milk but does not include dried milk, condensed milk or reconstituted milk or buffaloes milk or goats milk); milk beverage (means any beverage resulting from the combining with a liquid of milk fat and other solids derived from milk, whether exclusive of any food additive or otherwise); reconstituted milk (means products resulting from the recombining with water of milk constituents, namely, milk fat and other solids derived from milk exclusive of any other substance).

Reconstituted milk is not common in Hong Kong as milk and milk beverages are currently the mainstream. Based on whether they contained additives, samples were categorised into two groups in the test: milk drink (where milk is the only ingredient) and milk beverage (which contain ingredients other than milk, including modified milk and reconstituted milk). Vitargent purchased 68 milk drink and milk beverages under 29 brands from supermarkets in Hong Kong (ParknShop, fusion by ParknShop, Wellcome, City’Super) and online platforms (JD.com, Tmall.com) in the past year for fish embryo toxicity tests. Local and international brands were included, such as the Kowloon Dairy, Nestlé, Anlene, Anchor, Pauls, Harvey Fresh, Mengniu Dairy etc.

Vitargent performed tests on milk drink and milk beverage samples by adopting the Testing 2.0 technology, which is a patented fish embryo bio-testing technology. Under which, samples are categorised as Green Fish, Yellow Fish and Red Fish according to product safety. The test result was published on the online consumer product safety information platform, Test-it™, for consumers to recognise safe products sold by retailers. Test-it™ benchmarks against the national and regional product safety standards, including those imposed by the World Health Organization (WHO)[1], the European Union (EU)[2],[3],[4], the USA[5], China[6] and Japan[7], as well as the list of Substances of Very High Concern (SVHC) [8]prepared by the European Chemicals Agency (ECHA). Horizontal analysis against similar products was also conducted to establish safety standards:
Price of milk and milk fat content link with safety while products from Europe and America performed better than that from Asia and Oceania

In terms of price, the average price of the 68 samples purchased was 2.6HKD/100 mL. The most expensive one costed 10HKD/100mL, which was nearly nine times of the cheapest one which costed 1.1HKD/100mL.

In conclusion, the safety of the high-priced samples was relatively higher than mid-priced and low-priced samples, with nearly 80% samples rated as Green Fish.

In conclusion, in terms of both brand and product origins, Europe and America achieved a better result than Asia and Oceania in general, with 80% of samples rated as Green Fish.

Samples tested positive in fish embryo test for acute toxicants, additives and contaminants may be to blame

Vitargent’s Chief Executive Officer Jimmy Tao said, “Zebrafish embryo and transgenic medaka embryo were used in the acute toxicants and chronic toxicants tests of milk samples. In the zebrafish embryo test for acute toxicants, 46 samples (68%) were rated Green Fish, ten (15%) were rated Yellow Fish and 12 (18%) were rated Red Fish. As 84% of genes known to be associated with human diseases have a zebrafish counterpart, substances which are harmful to zebrafish may also be harmful to human. Our team observed under the microscope that, when zebrafish embryos are exposed to acute toxicants in milk samples, they developed abnormally and suffered from blood clotting disorders, heart swelling or even death in the most serious cases. The milk sample with the highest acute toxicity exceeded the safety standard of Vitargent by almost 17 times. Furthermore, all samples passed the transgenic medaka embryo test for chronic toxicants and none of them exceeded the limits for estrogenic endocrine disruptors.”

Chief Technology Officer and EU and UK registered toxicologist Dr. Xueping Chen explained, “The acute toxicity found in milk drinks might be related to chemical additives and contaminants in the samples. Among the 68 samples tested, 23 of them containing additives other than milk were categorized as milk beverages. 14 of such samples contained 5 to 13 types of additives, including emulsifiers, stabilizers, thickeners, nutritional supplements, flavourings and colourings. The additives most commonly added to milk beverage samples were mono- and diglycerides (as emulsifier, found in nine samples), microcrystalline cellulose (as emulsifier and stabilizer, found in seven samples), carrageenan (as thickener, found in six samples), sodium hexametaphosphate (as acidity regulator and stabilizer, found in five samples) etc. Certain samples were found containing additives with different purposes, such as calcium carbonate (as calcium supplement), lutein (as colouring), bixin (as colouring), Tween 80 (as emulsifier) etc.”

Moreover, the test also found Vitamin A supplement in five samples, Vitamin D supplement in eight samples and Vitamin E supplement in four samples. Dr. Xueping Chen said, “According to the WHO and regulations of different countries, taking supplements properly may not harm human body. However, Hong Kong people have developed the long-term habit of taking nutrition supplements and thus, they may exceed the suggested daily intake when considering the dietary nutrition. For example, Vitamin A is an antioxidant with preservative property. However, it is proved in medical studies that excessive intake may affect fat metabolism, leading to increase of toxicity in liver, low bone density and bone fracture in middle-aged and elderly women, and even birth defects[9]. In 2012, the Ministry of Health of Norway warned that pregnant women and nursing mothers should avoid products containing Vitamin A[10].” Dr. Xueping Chen pointed out that several toxicology research reports on milk published in recent years proved the risks of other toxics in milk, including known microbial contamination, mycotoxin (such as Aflatoxin) contamination[11], veterinary drugs residues[12],[13], pesticide residues[14],[15] and other unknown contamination (such as melamine)[16].

Nutritionist Annie Lee said, “Additives reduce nutritional value of milk and are unnecessary. The more additives in milk beverage, the lower the milk content. The body will get less nutrition, such as protein and fat-soluble Vitamins accordingly.”

Annie Lee pointed out that many parents hesitated on what age to give milk to their babies and what types of milk should be given. In fact, infants aged below twelve months should not be fed milk in replacement of breast feeding or infant formula because this hinders the intake of protein, sodium and potassium etc, and affects their growth and development. If the baby is allergic to milk protein, it may develop allergic reaction, including skin swelling, eczema, diarrhoea, vomiting, hematochezia or even asthma. Kids aged between 1 and 2 may have semi-solid food and whole milk which give extra energy and fat for their growth and their needs for body and brain development. Nevertheless, if young children have been fed with breast milk, it may take time for them to get used to cold fresh milk. Parents may take it step by step and feed them with sweet formula milk powder or cheese. Children aged 2 or above can drink high-calcium low-fat milk while children aged 5 or above with balanced development can drink skimmed milk. For adult and the elderly, low-fat dairy products are recommended. They should also increase intake of calcium based on their needs.

Annie Lee reminded that milk may not be suitable for all as everyone has different body conditions. People with a sensitive digestive system, milk allergy and lactose intolerance should avoid drinking milk. Lactose-free milk, soy milk, almond milk or rice milk are available for those with lactose intolerance. Furthermore, medicine should not be taken with milk because this will affect medical effect. Consumers should pay attention to the date of manufacture, expiry date and sterilization descriptions on labels when choosing fresh milk. In general, the shelf life of UHT Processed products is longer than that of pasteurized products. For coffee brewing, UHT processed dairy products are recommended as they can maintain more nutrition in high temperature.

[5] USFDA Food additive status list, Color Additives in Food, and Everything added to food in the United States (EAFUS).

[7] Standards for use, according to use categories.  Effective from September 26, 2016.