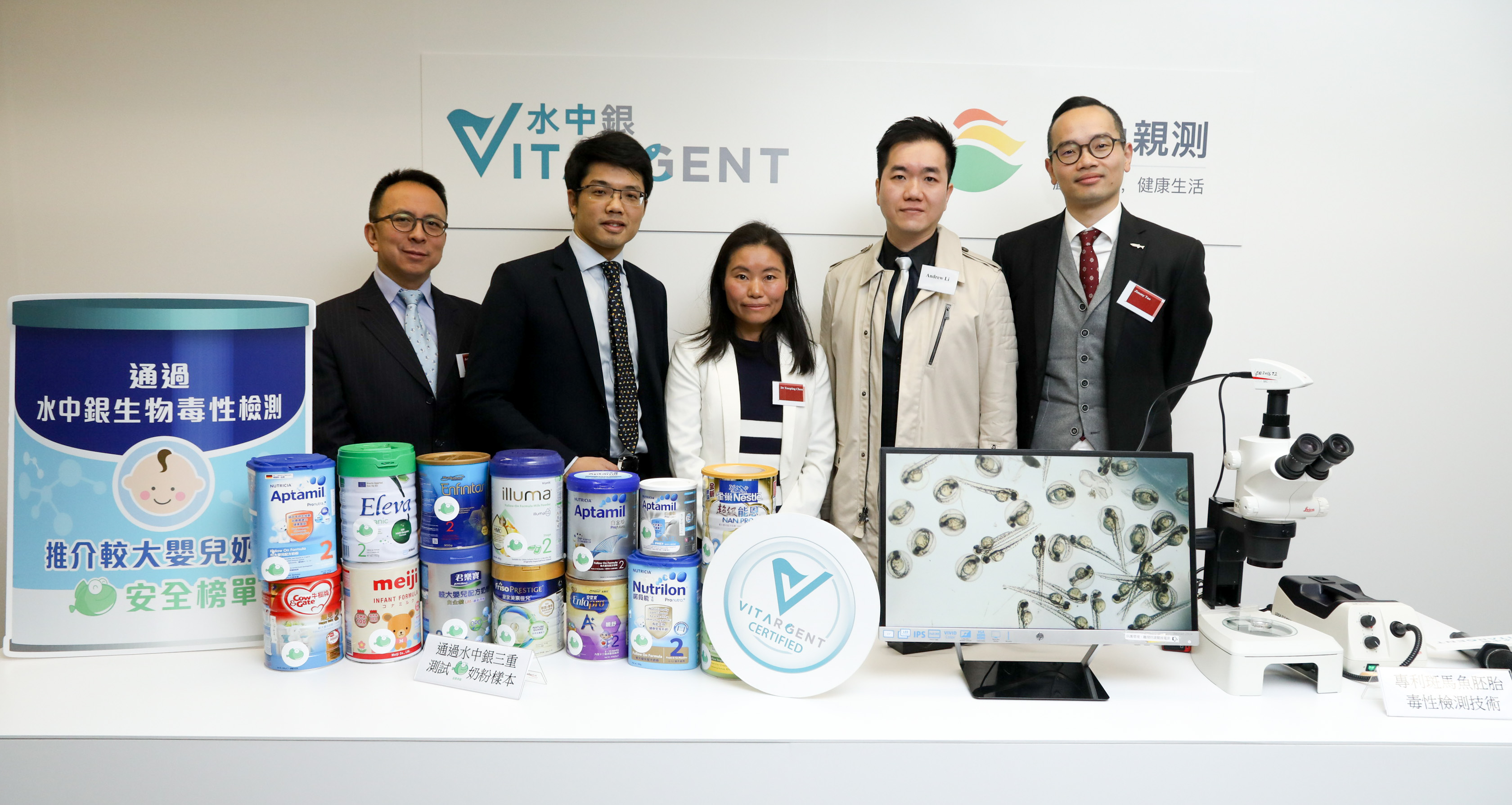 (Hong Kong, 02 February 2018) Vitargent (International) Biotechnology Limited (“Vitargent”) published new test results following the previous investigation in cooking oil, BB cream, instant coffee, sunscreen, ice cream, lip balm, liquid milk products and lipstick. Vitargent performs toxicity tests on 16 milk powder samples from 11 renowned brands in the market with the application of unique in the world “transgenic medaka” and “zebrafish” embryo toxicity testing technology developed by Hong Kong scientist.
Follow-on formula milk powder (Formula 2) for 6 to 12 month-olds is the main focus of the toxicity test. All powder milk samples passed the safety requirements according to the test results. Among the samples, 14 are rated “Green Fish” (excellence) in terms of safety and 2 are rated “Yellow Fish” (basic). The differences in safety ratings are determined by the acute toxicity test of zebrafish embryos. With reference to international toxicology data and reports, it is suspected that the toxic reaction might have resulted by individual or combined effects of major ingredients including milk or fat derived from various vegetable oils. Green Fish mark is recommended for consumers as a sign of quality product.
The majority of standard infant formula milk powder in the market are artificially produced with nutritional ingredients found in breast milk in addition to milk extract. The current trend of infant formula milk powder in the Hong Kong market targets at different age group, with follow-on formula milk powder as the main focus in sales and advertisement. Since imported powder milk are required to meet the International Organization for Standardization (ISO), there are no distinct variation in the nutritional ingredients between different brands. Vitargent collected samples from 11 renowned powder milk brands including Mead Johnson, Friso, Abbott, Cow & Gate, Wyeth etc, from the Mannings Store, Watsons Store, Eugene Baby and local pharmacies in Hong Kong from December 2017 to January 2018. A total of 16 follow-on formula milk powder were being sampled (Formula 2, for 6 to 12 month-olds). Three of which are stated as suitable for 0 to 12 month-olds (2 samples) and 6 to 18 month-olds (1 sample).

Vitargent performed tests on formula milk powder samples by adopting the Testing 2.0 technology, which is a patented fish embryo bio-testing technology. Under which, samples are categorised as Green Fish, Yellow Fish and Red Fish according to product safety. The test result was published on the online consumer product safety information platform, Test-it™, for consumers to recognise safe products sold by retailers. Test-it™ benchmarks against the national and regional product safety standards, including those imposed by the World Health Organization (WHO)1, 2, 3, the European Union (EU)4,5,6,7,8, the USA9, China 10,11,12,13 and Japan14, as well as the list of Substances of Very High Concern (SVHC)15. Horizontal analysis against similar products was also conducted to establish safety standards:

Red Fish means “Sub-Optimal” in terms of safety, indicating a product is below standard in one or more criteria in the screening of acute toxicity, chronic toxicity and ingredient check. Consumers are recommended to purchase with extra caution.

Excellent overall performance for follow-on formula milk powder
Quality of milk extract and vegetable oil may affect toxicity rating
Vitargent’s Chief Executive Officer Jimmy Tao said, “The average price of the test samples is 43HKD/100g. The most expensive sample costs 62HKD/100g and the cheapest costs 26HKD/100g, showing more than a double in the price differences. In terms of place of production, samples were produced from Germany, Denmark, Netherlands, New Zealand, Ireland, Japan and China. In terms of brand origins, samples under the test were from Netherlands, Germany, The United States, China, England, Switzerland and Japan. They are all sold in Hong Kong.”
Jimmy Tao also said, ““Zebrafish embryo and transgenic medaka embryo were used in the acute toxicant and chronic toxicant tests of milk powder samples. With the safety benchmark drawn from our internal baby milk powder data, the follow results were found: fourteen (87.5%) samples were rated Green Fish, two (12.5%) were rated Yellow Fish. All samples in the transgenic medaka embryo chronic tests had successfully met the WHO safety benchmark. No estrogen were detected, which would have resulted in a glow of green fluorescent in the embryo’s liver. For the ingredient screening. According to the standards (CODEX STAN 72-1981) and (CODEX STAN 156-1987) from the Codex Alimentarius Commission, in addition to the baby formula safety standards in EU, China, USA and Japan, no prohibited and highly concerned ingredients were found in the samples.”
Jimmy Tao emphasized, “The overall performance of the milk powder test is excellent. However, the differences between Green Fish rating and Yellow Fish rating reflected toxicants were detected in the acute toxicity test. The toxic reaction is undoubtedly a result of individual or combined effect.”
According to the food labelling regulations in Europe16, USA17 and Hong Kong18, each ingredient must be listed proportionately according to the weight and size, from the highest proportion to the lowest. Milk extract (skimmed milk and powdered milk) are listed on the top of the label. According to the liquid milk and milk products test results from last year, toxicity level of milk varies. Multiple international toxicology reports on milk reveals that there are other toxicity risks in milk products. Toxicants found in milk include the well-known microcin (aflatoxin)19, residues of veterinary drug20,21, pesticides residues22,23 and other unknown contaminants including melamine24, we have every reason to believe that contaminated milk is the cause of the additional toxicity. Another main ingredient of milk powder is fat, usually consist of various vegetable oils (including soybean oil, sunflower oil, coconut oil, rapeseed oil, and palm oil) combined.

“According to Vitargent’s edible oil data, the test result of coconut oil, sunflower oil, rapeseed oil and palm oil were below average. It indicates that vegetable oils might increase the risk of toxicity. We therefore recommend Green Fish milk powder for safe consumption.” Jimmy Tao added.

Caution with formula choices:
Advertised formula might contain ingredients unnecessary for baby’s growth
Andrew Li, Registered Nutritionist said, “breast milk is the first choice of nutrition for babies since it covers every nutrient an infant needs for growth in the first 6 months since birth. However, if breast milk is unavailable to the baby, milk powder is a good substitution.  In general, newborn to 6 month-olds are safe to consume infant formula. However, be cautious not to feed them “follow-on formula”, which is rich in protein. High protein milk powder can overburden the infant’s kidney. It may lead to intestinal inflammation or brain damage even. For 6 to 12 month-olds, both infant formula and follow-on formula are safe to consume depending on their developmental needs. Milk is the main source of nutrition for a newborn. When liquid and solid food is introduced into a baby’s diet, intake of milk can be reduced. After the baby turned one years old, a well-balanced and diversified solid food diet can substitute milk as the major source of food. Infant can switch to drinking whole milk (UHT Processed) to obtain enough fat for growth.”
Andrew Li remarked, “UHT processed milk might lead to a loss in water-soluble vitamins and reduce the nutrition intake. In addition, since the infants’ immune systems are underdeveloped, they might be allergic to milk protein and suffer from eczema. Soy milk is recommended as a substitute for those with milk protein allergy, irritable bowel syndrome and lactose intolerance.”
Andrew Li concluded, “The major nutritional ingredients of milk powder include protein, fat, carbohydrates, vitamins and minerals. These are the basic nutrients for every ISO standard mass produce milk powder. However, some formula powder in the market emphasizes on additional ingredients that imitates breast milk or custom for infant’s growth, which is completely unnecessary. For example, probiotic, nucleotide, taurine, amino acids, oligosaccharides, polysaccharides and polyglucose.”

“The advertised additional formula aren’t necessarily the more the better. Since some additional nutrients are very low in content. Not to mention some additional ingredients are synthetic instead of natural. for example: vitamin A, B or C. Infants might not be able to fully absorb the synthetic ingredients. Therefore, parents can choose milk powder with well-balanced nutritional ingredients according to Codex Alimentarius Commission standard. Food additives found in milk powder including surfactant, stabilizer, and acidity regulator are not harmful to infants. Parents need not to worry about that.”

7 Regulation (EU) No 609/2013 of the European Parliament and of the Council of 12 June 2013 on food intended for infants and young children, food for special medical purposes, and total diet replacement for weight control.

9 USFDA Food additive status list, Color Additives in Food, and Everything added to food in the United States (EAFUS).

14 Standards for use, according to use categories.  Effective from September 26, 2016.