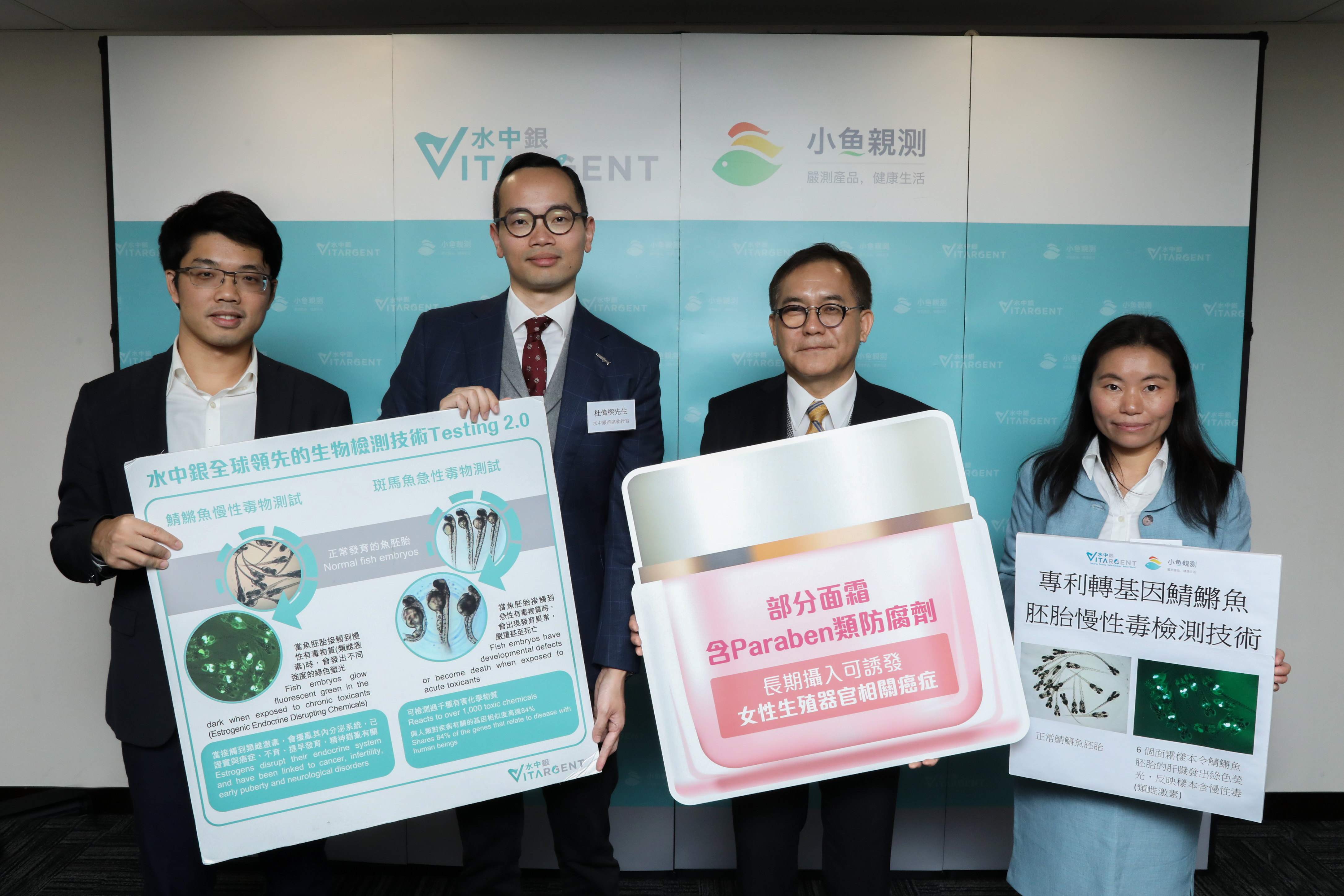 (Hong Kong, 13 March 2018) Vitargent (International) Biotechnology Limited (“Vitargent”) published test results of 30 popular face cream products under 30 brands available in the market on its Test-it™ information platform (w2.fishqc.net). Known for its recent nine safety examinations of cooking oil, BB cream, instant coffee, sunscreen, ice cream, lip balm, milk products, lipsticks and infant milk powder, Vitargent has applied the “transgenic medaka” and “zebrafish” embryo toxicity testing technology, which is unique in the world and developed by Hong Kong scientists. Based on the agreed scope and procedures with Vitargent, PricewaterhouseCoopers has compared the test results performed by Vitargent to the classification of tested products into green, yellow and red fish according to Test-it Standard and the numerical figures presented within the “Finding of Test-it” session in this report. The safety test rated 17 samples as Green Fish (excellent), 1 sample as Yellow Fish (basic) and 12 samples as Red Fish (sub-optimal). Multiple samples contained international prohibited and restricted ingredients, carcinogenic ingredients and xenoestrogenic ingredients. Various international studies had proven that xenoestrogens are easily absorbed by the human body, found in breast milk, breast tissue, cord blood and even placenta, threatening the health of the next generation. Vitargent suggests the public to pay extra attention to the ingredient labels upon choosing face creams for consumption. It is advised to choose products with basic functionality and less preservatives, sunscreen, spices or alcohol.
Skin damaging ingredients found in face cream
Vitargent detected toxicity with innovative bio-testing technology Testing 2.0

Wrinkles, dry skin and skin scraping could result from ageing and seasonal changes. Applying decent amount of face cream moisturises and protects the skin. Apart from brand preferences, skin type and price, some consumers make their face cream choices based on the special features listed on the ingredient labels. For example: skin tightening, moisturizing, whitening, antioxidants, anti-inflammatory, allergy relief and sunscreen. However, the public may overlook the risk of health threats from the special features chemicals. From July to August 2017, Vitargent collected 30 samples from 30 brands for toxicity tests from local Watsons, cosmetic counters and online platforms (Joyby, Tmall). The brands included SK-II、Estee Lauder、Laneige，FANCL.

Vitargent performed tests on face cream samples by adopting the Testing 2.0 technology, which is a patented fish embryo bio-testing technology. Under which, samples are categorised as Green Fish, Yellow Fish and Red Fish according to product safety. The test result was published on the online consumer product safety information platform, Test-it™, for consumers to recognise safe products sold by retailers. Test-it™ benchmarks against the national and regional product safety standards, including those imposed by the World Health Organization (WHO)[1], the European Union (EU), the USA[2], China[3] and Japan[4], as well as the list of Substances of Very High Concern (SVHC) [5]prepared by the European Chemicals Agency (ECHA). Horizontal analysis against similar products was also conducted to establish safety standards:

➢    Green Fish means “Excellence” in terms of safety, indicating good performance in the screening of acute toxicity, chronic toxicity and banned ingredients. Consumers can rest assured that the products are safe for purchase;

➢    Yellow Fish means “Basic” in terms of safety, meaning a product meets the safety baselines in the screening of acute toxicity, chronic toxicity and banned ingredients. Consumers are recommended to purchase with caution;

➢    Red Fish means “Sub-Optimal” in terms of safety, indicating a product is below standard in one or more criteria in the screening of acute toxicity, chronic toxicity and banned ingredients. Consumers are recommended to purchase with extra caution.

Mid-priced face creams are safer compared to low-priced and high-priced samples
Brand’s origin and place of production differs
Among the 30 samples, Test-it™ rated 17 samples as Green Fish (Excellent), 1 sample as Yellow Fish (Basic) and 12 samples as Red Fish (Sub-optimal).
In terms of price, the average price of the 30 samples purchased was 6.3HKD/g. The most expensive one costed 50HKD/g, which was nearly 500 times of the cheapest one which costed 0.1HKD/g.

In conclusion of brand origins and production comparison, due to the insignificant amount of samples from a certain regions, the result does not reflect the differences between the two. However, Asian and European samples showed a well-balanced overall performance. It is a good sign for the public.

Multiple face cream samples contained Paraben preservatives
May lead to reproductive cancers and infant deformities
Vitargent’s Chief Executive Officer Jimmy Tao said, “Zebrafish embryo and transgenic medaka embryo were used in the acute toxicants and chronic toxicants tests of face cream samples. In the zebrafish embryo test for acute toxicants, 2 samples failed the toxicity test. Our team observed under the microscope that, when zebrafish embryos are exposed to acute toxicants in face cream samples, they developed abnormally and suffered from blood clotting disorders, heart swelling and even death. As 84% of genes known to be associated with human diseases have a zebrafish counterpart, substances which are harmful to zebrafish may also be harmful to human. The process of zebrafish puberty imitates that of human’s. One day of zebrafish puberty is equivalent to 12 weeks of infant puberty (3months). Their tissues and organs including heart, bones, glands and kidney functions and reacts biologically identical to humans. Thus any toxicant that harms a zebrafish would pose the same health threat to a human being.

In the transgenic medic embryo for chronic toxicants, 6 samples failed the toxicity test. When transgenic embryos are exposed to the chronic toxicants (xenoestrongens) in the face cream, their liver glows in green. The glow intensity quantifies toxicants in the samples. The World Health Organization had stated that xenoestrogen could lead to health threats including cancers ( breast cancer, ovarian cancer, cervical cancer, thyroid cancer etc.), decreased reproductive ability, nervous system dysfunction and diabetes[6].”

“We have anticipated the test results, since some of the samples contained chemical preservatives, toxicity in samples would increase under both individual and compound effects. During the randomly sampling, our team discovered 18 samples contained different chemical preservatives. 6 of which contained internationally prohibited ingredients. Isobutylaparaben (found in 1 sample) is banned by EU[7] and China[8] in year 2014 and 2015 respectively. Methylisothiazolinone, MI (found in 3 samples) was listed as prohibited10 ingredient by the EU in year 2016. Ci 14700 / red 4 was listed as prohibited10 by the EU in year 2009. Orange 4 was banned by the US[9] Furthermore, other common preservatives were also found in the face cream samples, including Butylated hydroxytoluene, BHT (found in 2 samples), DMDMH (found in 1 sample) and Paraben preservatives (found in 11 samples). BHT could lead to skin rashes and allergies[10]. International toxicology studies indicate that excessive intake could lead to accelerated tumor growth in lung cancers[11]. EU Scientific Committee on Consumer Safety, SCCS had proven that DMDMH could release formaldehyde carcinogen that causes skin stimulation and leads cancers with chronic consumption. Paraben is a known xenoestrogen that could lead to health threats listed above including cancers. Pregnant women may even pass the xenoestrogen on to the next generation. It is scientifically proven that these substances are found in breast milk[12], breast tissues[13], cord blood[14] and even in the placenta[15], taken in through the baby’s brain, respiratory system, intestines and skin. It could cause health problems like development deformity or precocious puberty and obesity.”

On one more note, allergen (6 samples) and wax (3 samples) were found in the face cream samples. Eugenol Eugenol, Coumarin, hydroxycitronellal, Geraniol, Citronellol, Benzyl Alcohol, D-limonene limonene are known allergens for fragrance enhancement which lead to skin allergy[17], itch and pigmented cosmetic dermatitis. Wax including Petroleum jelly and petrolatum are low cost and common moisturizers, however they are ineffective in terms of locking in the moisture. Compared to other skin tissues, lips are more sensitive to allergies.

World Health Organization listed estrogen as group 1 carcinogen
Implement skin protection by learning the ingredient labels
Dermatologist Dr. Hui Shiu Kee indicates that the commonly known estrogen mainly refers to the hormones from the female ovaries. Apart from natural secretion, many chemicals including Paraben preservatives and chemical sunscreens share similar chemical structure with estrogen. Once inside the human body, they imitate estrogen and similarly affects organs and tissues. These chemicals are known as “xenoestrogens”. There are a lot of estrogen receptors on the skin. External intake of xenoestrogens could lead to hyperpiasia, making the skin more moisturised and elastic. However, they come with long lasting side effects. Chronic consumption could lead to cancers including breast cancer, ovarian cancer, prostate cancer, reduction in reproduction ability, and increased chances of stroke. Furthermore, pregnant women, infants and teenagers going through puberty are most affected by endocrine disruptors (i.e. xenoestrogens). They may lead to disruption in endocrine, physiological imbalance, obesity and precocious puberty. Women may also suffer menstruation disruption as a cause. World Health Organization had listed estrogen as group 1 carcinogen[18].  Dr Hui said that estrogen enter the body through oral intake or external use. Patients undergoing treatments with estrogen should follow doctors’ instructions for the correct amount of intake.

Dr Hui explained that the main function of face creams is to act as a natural barrier for the skin. It forms a thin mask over the skin surface, reduces water loss and helps moisturising. A good face cream must contain the functions of moisturising and softening. Moisturisers help absorbing water deep into the dermis. The most common ones are propylene glycol, glycerin and butylene glycol. Softeners are usually added into face creams to smoothen the skin surface to make it soft and elastic. The most common ones are jojoba oil or was. Furthermore, some face creams contain natural or compound preservatives. To a certain extent, preservatives protects the product as they prolong bacteria growth or spoiling from chemical changes. However, there are good and bad preservatives. The public should recognise toxic preservatives (i.e. Paraben) and pay attention to ingredient labels on the face creams. Be alert about the major ingredients on the top (represents high percentage in the formula), prevent additives including fragrances, alcohol, alcohol dent etc, and choose products fit for their own skin type.

Dr Hui reminded the public that face creams with stimulants including spices, alcohol, preservatives or sunscreens are not suitable for skins with allergy or eczema. To sample a new face cream brand, first apply on the back of the hand or on the soft skin of the inner forearm. Then, let it sit for 30 minutes. If it does not cause allergy reactions, rashes or burning, it is safe to use. Furthermore, some parents moisturise their children’s faces with adult face creams. Since children’s skin is more sensitive, the spices and preservatives in adult face creams may lead to allergic reactions, eczema or contact dermatitis. Parents should avoid applying adult face creams on their children and apply children face creams with simple ingredients. In general, twice a day is adequate for skin treatment. However, the high humidity in Hong Kong might lead to high face cream loss rate. Apply more face creams in case of excessive sweating, extra dry circumstances and partaking water sports. Do not excessively apply or it will clog the pores.
For detailed product list of Green Fish which passed the acute toxicants, chronic toxicants tests and ingredients check, please visit the online consumer product safety information platform Test-it™ at w2.fishqc.net for a wise choice.

[2] USFDA Food additive status list, Color Additives in Food, and Everything added to food in the United States (EAFUS).

[4] Standards for use, according to use categories.  Effective from September 26, 2016.

[6] WHO & UNEP. State of the science of endocrine disrupting chemicals-2012